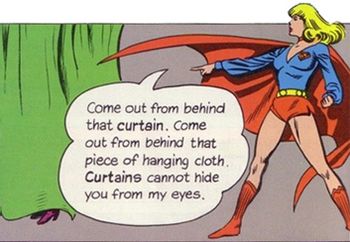 Preach it, Supergirl!
"I hide behind curtains 'cause I have a fear of getting stabbed."
— Polonius (Chief Wiggum), The Simpsons on Hamlet
Advertisement:

There are only so many places a person can hide, but one that's available in most indoor locations is the common curtain. When someone's coming and you've got to get out of sight quick, just duck behind one of these and you're golden. Oh, drapery — where would Exact Eavesdropping and Wacky Hijinx be without you?

Bonus points if you see the shoes peeking out under the bottom. Triple bonus if the shoes were specifically put there to throw the searcher off the scent.

Close cousin to the Closet Shuffle. May lead to a Dramatic Curtain Toss. Not related to The Man Behind the Curtain, although one of those may use this.