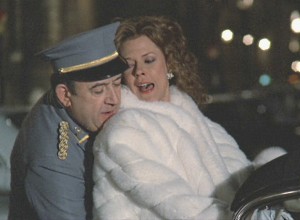 Can speak five languages, but can't hold her liquor.
"Dimitri," said Rebecca, "you know I always get my man, even when he's a woman."
Advertisement:

Rebecca Ryan, a Lady James Bond Expy (although she's a private detective instead of a secret agent), is the main character in a popular series of novels by Margaret McMann. The author's son, Alan (Conti), has been living the life of a playboy, until one day a woman (Williams) shows up claiming to be Rebecca, and causing all sorts of trouble.

It turns out she is actually Cathy Palmer, a Housewife stuck in an unhappy marriage. Her best escape has been these novels, and after winning a trip to Paris, she suffers a concussion, and is now living as her favorite character. Of course, she doesn't have any of Rebecca's skills and sees danger when there isn't any, and Alan is helplessly caught in her wake.

But perhaps there is some danger.

This light comedy doesn't have the madcap situations this setup implies, but it does have a good degree of Deconstruction of the kind of character Rebecca is.

Unrelated to the 2018 thriller of the same name starring Jim Gaffigan.