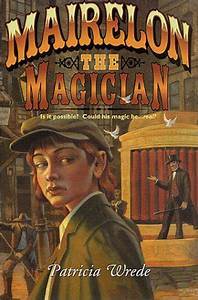 The cover of the reissued first book
Mairelon the Magician is a fantasy novel by Patricia C. Wrede, set in a version of Regency England with wizards.
Advertisement:

Kim, a street urchin, attempts to rob a traveling magician, discovers that he has real magical powers, and winds up as his apprentice.

There is a sequel, Magician's Ward, and the two books have been published together in a collected edition under the title A Matter of Magic. The Science Fiction Book Club also released a combined edition, under the title Magic & Malice.