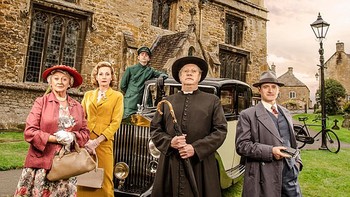 A daytime BBC television series inspired by the Father Brown mystery stories written by G. K. Chesterton, starring Mark Williams (whom you might recognise as Arthur Weasley, Brian Williams or part of Paul Whitehouse's team on The Fast Show) as the mystery-solving Catholic priest.

The series is inspired by Chesterton's original stories but is otherwise very different. Whereas the originals were set between 1911 and 1936 and had the good father turn up all over the world, this series is set in the early 1950s and positions Father Brown as the kind-hearted and insightful priest of the fictional parish of Kembleford in the Cotswolds. Five of the early episodes were loose adaptations of Chesterton's stories; the remainder are complete originals.

There is a small regular supporting cast, either associates of Father Brown who help him solve cases, or police who fervently wish he would stop interfering in their work. In the first series they were Mrs. McCarthy (Sorcha Cusack), the holier-than-thou parish secretary; Lady Felicia (Nancy Carroll), a wealthy socialite with a wandering eye and a frequently-absent husband; Sid (Alex Price), a local handyman and petty crook whom Father Brown tries to keep on the straight and narrow; Susie (Kasia Koleczek), a Polish refugee who works as Father Brown's part-time housekeeper; and Inspector Valentine (Hugo Speer), a long-suffering detective. Series 2 rotates out Inspector Valentine for the less-tolerant Inspector Sullivan (Tom Chambers), who in turn was succeeded by the irascible Inspector Mallory (Jack Deam) in Series 4. Series 5 introduced Bunty (Emer Kenny), Lady Felicia's adventurous niece.

The first series aired over two weeks in January 2013, composed of ten episodes. Series 2, 3, and 4 followed in the January of each subsequent year. The first Christmas special was shown in December 2016, with the rest of Series 5 in January 2017. This repeated itself with Series 6, with the first episode being shown on December 18th, before continuing after the holidays on January 2nd.

A Spin-Off series starring Lorna Watson as Sister Boniface from "The Bride of Christ" episode called The Sister Boniface Mysteries begun production in 2020 for the streaming service, BritBox.