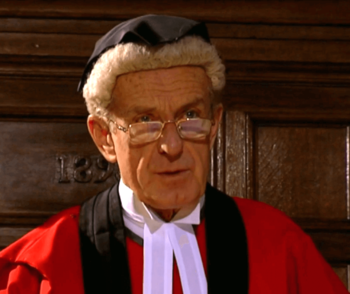 In British Courts, a black capnote A simple square of black silk placed over the top of the judge's wig, with the sides at an angle relative to the side of his or her head. is the ultimate symbol of doom for a condemned man. Seeing a judge put it on lets all present in the courtroom know that, barring some miraculous appeal or other happenstance, the fate of the prisoner at the dock has been sealed. The sentence of death shall soon be passed. While British Judges are still issued the caps, the death penalty has been abolishednote Although the unlikely-to-be-enforced offences of violent piracy and high treason were both technically capital crimes until 1998. (and now banned Europe-wide by the European Convention on Human Rights

), so they're unlikely to ever see use (with the possible exception of cases where the British Judicial Committee of the Privy Councilnote Whose members consist primarily of the Justices of the Supreme Court of the United Kingdom, though it has other members still acts as court of final appeal for residual colonies or for former colonies which apply British law and still have the death penalty).

Despite this, a judge wearing a black cap still serves as shorthand for "this prisoner's been sentenced to hang" (similarly to The Executioner's hood). A particularly crazy Hanging Judge might even be already wearing it.

The cap has a black Color Motif both because black is the traditional color of death and mourning,note in the Western world, anyway and to signify that the judge is humble before God who has the only real power over life and death.

Useless trivia: when the British ruled over Ireland, the judicial black cap was known in Gaelic as the caip bais, pronounced "kybosh". Thus a new word entered English. Of course, the judge wasn't so much putting the kybosh on his own head as, symbolically, on the condemned man's...