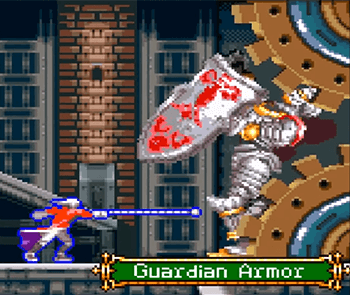 A particularly Cruel and Unusual Death where a character ends up trapped in a mesh of large machinery, which crushes and grinds them into a pulp. Oftentimes, given the purpose of the devices, it features someone being wedged between two of them at once. If this happens in a cartoon, chances are the character involved will simply be Squashed Flat.
Advertisement:

Often goes hand in hand with a Conveyor Belt of Doom. Places where this can happen are often guilty of No OSHA Compliance. Surprisingly has nothing to do with Gears of War. Often involves a Gory Discretion Shot. Not to be confused with what grinds your gears. Compare with Deadly Rotary Fan and Fold-Spindle Mutilation.

This is often a Death Trope, so all spoilers are unmarked.