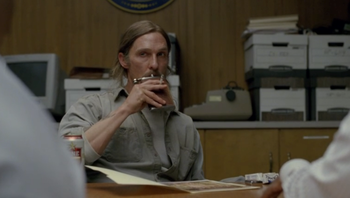 Whatever gets you through the day.
Advertisement:

A character ingests intoxicants — usually, but not always, alcohol from a hip flask — casually, without interrupting whatever else he's doing, without commenting on it, and sometimes without drawing comment from other characters.

This versatile bit of business turns up in both comedy and drama and, depending on context, can say any number of things about a character. It may be used to portray him as pathetically dependent; or, conversely, to establish him as a low-grade badass, Immune to Drugs; or, if it's not habitual, to emphasize that he's under unusual stress. Or the focus may be on the other characters' lack of reaction: they know this guy so well, they're used to it.

In Blacksmith Scene, the first film ever, the characters share a beer before getting back to work, making this Older Than Television.

Contrast Bottled Heroic Resolve. May be prone to declaring "No More for Me" on seeing something too weird to handle. See also Drinking on Duty.