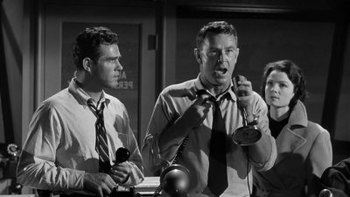 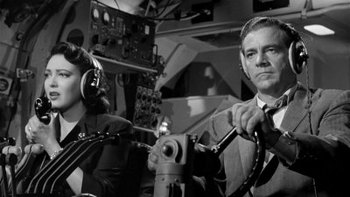 The two halves of a Crash Course Landing: those on the ground, and those in the air
Advertisement:

The pilot(s) has been taken out somehow, and only you can land this plane. The thing is that even if you know how to fly a plane, you don't have training with how to fly this type of plane. So someone has to walk you through working all the complicated machinery and instruments, and hopefully you can glean enough from what they are telling you to land the plane safely.

Seems ridiculous, right? I mean, just a few simple instructions and you can learn how to land a plane? Please!

Wait. Mythbusters tried it out, and Jamie and Adam both pulled it off. Who knew? Okay, not everyone agrees with the test, but the common knowledge was that it shouldn't have been possible even under controlled conditions.

And it was still a cliché long before they tried it out. And even if it's actually possible, the contrivances to get the hero into this situation tend to stretch the Willing Suspension of Disbelief.

Plus the basics of flying a plane that's already in the air are very, very easy - in fact, planes pretty much fly themselves (at least in most situations). The hard part about flying is doing it 15 hours in a row in bad weather with a sky full of other planes, with air traffic control constantly yelling at you and your crew mishandling the complex avionics. Start-up of a contemporary jet involves roughly 30 minutes of systems checking and button mashing. And of course you'll have to land the plane >100 times a year without a scratch. So there, that explains the 1500 flight hours requirement for the Airline Transport Pilot License.

Compare Falling into the Cockpit and Coming in Hot.

Linda is able to land the seaplane from watching Kurt previously fake land it.

Linda is able to land the seaplane from watching Kurt previously fake land it.