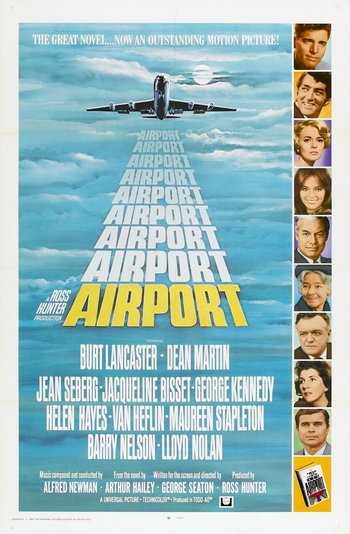 Airport, directed by George Seaton and released in 1970, was the first in a series of Disaster Movies produced in that decade and centering around aircraft in distress. Adapted from the novel of the same name by Arthur Hailey, it can be considered a very close and faithful adaptation; the sequels, however, have nothing to do with an original book.

The movie begins with the day-to-day concerns and life issues of various crew and patrons of Chicago's fictional Lincoln International Airport (actually, a redressed Minneapolis-St. Paul Airport). The central drama to this movie seems to be marital problems; first in the guise of difficulties between airport manager Mel Bakersfield (Burt Lancaster) and his wife. Mel has a rivalry with his brother-in-law, pilot Vernon Demerest (Dean Martin), over who's right about airport operations. Demerest also happens to be doing the deed with one of his flight attendants, Gwen Meighen (Jacqueline Bisset). However, Mel is fortunately not alone; he does have help from Trans-Global Airlines Supervisor of Passenger Relations Tanya Livingston (Jean Seberg) and TWA Chief of Maintenance Joe Patroni (George Kennedy) in addressing the numerous challenges... usual and unusual.

A wrinkle that will disrupt the whole flow of things is a despondent, suicidal passenger (Van Heflin) who plans to bring down an aircraft via a bomb. He's only partially successful, and now the stricken plane must be brought to safety — and another airliner is stuck in the snow on the only suitable runway. Can the ground crew get the stranded aircraft cleared from the runway in time?

Helen Hayes' performance as elderly stowaway Ada Quonsett won her an Academy Award, and the movie was enough of a hit to effectively serve as the Trope Codifier for the '70s disaster movie genre, paving the way for such films as The Poseidon Adventure, Earthquake, and The Towering Inferno; and probably also for the trope Explosive Decompression, at least as it's used in films.

Airport itself spawned three sequels: Airport 1975, Airport 1977, and The Concorde... Airport '79 (in a Concorde!). A TV-movie and miniseries was also created in the aftermath of Airport; San Francisco International Airport. (The miniseries simply dropped the word Airport). Today, it's probably best known for having inspired Airplane!, The Parody of '70s disaster movies. For a while this franchise was something of an employment agency for older actors and actresses from the studio era. Stars from The Golden Age of Hollywood who appeared in one or more Airport movies include Hayes, Gloria Swanson, Dana Andrews, Myrna Loy, Joseph Cotten, Olivia de Havilland, and Jimmy Stewart.

Tropes present in the original Airport include:

Tropes present in Airport 1975 include:

Tropes present in Airport '77 include:

Tropes present in The Concorde... Airport '79 include: