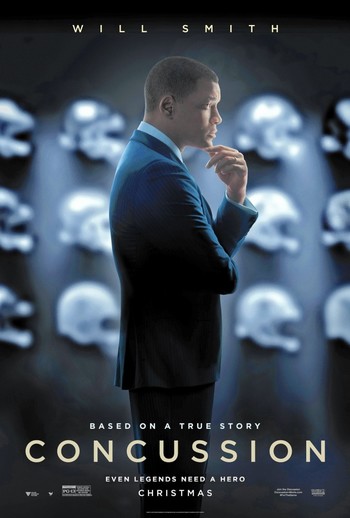 Concussion is a 2015 dramatic thriller produced by Ridley Scott, written and directed by journalist-turned-filmmaker Peter Landesman, and starring Will Smith.

The movie tells the true story of Dr. Bennet Omalu (Smith), a Nigerian-born pathologist based in Pittsburgh who, after conducting an autopsy on the body of former Pittsburgh Steelers center Mike Webster (who had been suffering from severe physical and mental illness since his retirement), discovers extensive brain damage known as chronic traumatic encephalopathy (CTE) in Webster's brain, presumably as a result of the large number of head injuries he sustained during his career in the NFL.

Omalu digs deeper, with the help of his mentor Dr. Cyril Wecht (Albert Brooks) and NFL insider Dr. Julian Bailes (Alec Baldwin) and discovers what appears to be an insidious coverup by the League, denying the connection between Football and mental illness, despite a long and increasing list of players who were traumatized by the injuries they sustained. Omalu himself eventually becomes caught in the crossfire, with the League trying to discredit both the work and the man himself.

See also League of Denial, a 2013 book and PBS Frontline documentary about the NFL's concussion crisis.