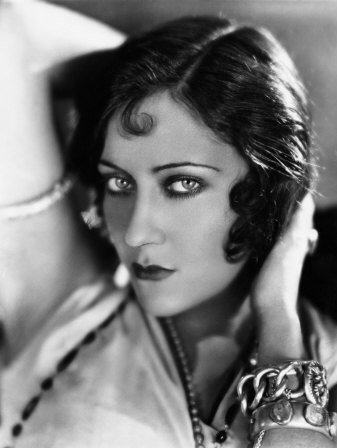 "A lot of people thought Norma Desmond was the story of my life. I'm not a recluse, nor am I out of the past... It's amazing to find so many people who I thought really knew me could have thought Sunset was autobiographical. I've got nobody floating in my swimming pool."
Advertisement:

Gloria May Josephine Swanson (March 27, 1899 — April 4, 1983) was a famous American actor who began her career during the The Silent Age of Hollywood. She was not only famous for her films but her fashion sense, her 6 marriages and an affair with Joseph P. Kennedy, Sr.

Gloria grew up an army brat, travelling the world at a young age with her parents. Her film career started by chance when she became an extra for a studio in her hometown of Chicago. There she met her first husband, Wallace Beery, and they both moved to Hollywood. At Triangle studios, Gloria honed her comedy skills with the Mack Sennet comedies that were very popular during their day, but stardom would come calling once Paramount and, most importantly, Cecil B. DeMille discovered her. The light farces and epics, directed by DeMille and starring Swanson, made her an overnight star.

Through her hard work and fame, she produced her own films, a rare instance in 1920s Hollywood. In 1928 she produced and starred in the hit, Sadie Thompson, where she earned a nomination for Best Actress. However, her next production, Queen Kelly, was a notorious disaster that left Swanson financially devastated. And the rise of the talkies made matters worse. It started well for Swanson with her first talkie (The Trespasser) becoming a hit and garnering Swanson another Best Actress nod, but the following films were all box-office failures. Consequently, her fame faded as the 30s and 40s passed, and Swanson was interested in Broadway, radio, and anything other than the silver screen.

Swanson came into the limelight once more with her portrayal of White-Dwarf Starlet, Norma Desmond, in Billy Wilder’s classic Film Noir, Sunset Boulevard. This role, somewhat ironically, would be the one most audiences today remember her for. Although this could’ve been a huge career resurgence for Swanson, she considered the roles offered thereafter to be cheap Norma Desmonds, someone she wasn’t like in real life. She continued working on the stage, designing clothing for middle-aged women, and living on a vegetarian, sugar-free diet.

In 1980 her biography Swanson on Swanson, ghostwritten by her final husband, William Duffy, was a commercial success and left an indelible mark on her Hollywood legacy.