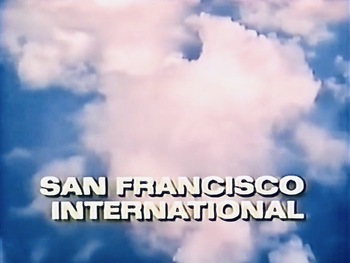 San Francisco International (Airport) is a 1970 NBC drama series partially inspired by Airport. Similar to other airplane-based disaster movies, it concerns the interpersonal interactions among the major staff of the titular airport. Unusually for an airplane disaster movie/series, the airlines are real, lending a sort of authenticity to the proceedings.

The series began with a 90-minute Pilot Movie, San Francisco International Airport. Jim Conrad (Pernell Roberts) is the general manager of the titular airport. Much like in other disaster movie entries, he must fight with several challenges, including getting the airport runways expanded, dealing with VIPs, protecting a shipment of cash that figures into a kidnapping caper, and talking down a troubled young man. All of these plot threads intertwine throughout the movie, so much so that each of the main cast gets a chance to interact with one another. Filling out the helpful assistance role would be Bob Hatten (Clu Gulager), the airport's security chief.

Though critical response was lukewarm, the pilot was picked up for six episodes (as part of NBC's Wheel Program Four in One) in the fall of 1970, but was not renewed beyond the initial six. In the series version, the network stipulated that Lloyd Bridges replace Pernell Roberts; only Clu Gulager was retained for the series. Interestingly, it's apparently the same character of Jim Conrad that Lloyd Bridges parodies in Airplane!.