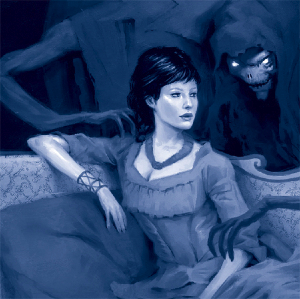 Coming back isn't the problem. It's making everything else stay dead that is.
Advertisement:

Geist: The Sin-Eaters is the seventh game for the Chronicles of Darkness, released in August 2009. Despite the name, the writers are on record that Geist is not a direct successor to Wraith: The Oblivion; geists, whatever else they may be, are not exactly wraiths or ghosts. It is something of a Spiritual Successor to Wraith in that it takes a look at the Underworld and what goes on there. The game bears some similarity to two Old World of Darkness games that also dealt heavily with the Underworld: Mummy: The Resurrection and Orpheus. The former dealt with a recently dead person bonded with an ancient spirit and brought back to life; the latter had (as one character type) a character who would enter a near-death state and become a 'ghost' out of body, gaining strange ghostly powers in the process. Inspiration for the game may well stem from all three sources.

The game focuses on two different groups: Sin-Eaters (often called the Bound), people who came Back from the Dead, and geists, the strange quasi-ghosts who came back with the Sin-Eaters.

Terminology: When Sin-Eaters return from the dead after striking a Bargain with their particular geist, they become linked to a Threshold, determined by the way they died (replaced by the Burden in second edition, symbolizing the reason for accepting the Bargain). Fusing with a geist allows Sin-Eaters to share their powers, Manifestations. The Key a Sin-Eater uses to activate a Manifestation determines its sphere of influence. In the second edition, Manifestations, now called Haunts, are much more specific powers, while Keys add an additional Skill to the Haunt's roll, as well as a cosmetic effect, rather than determining the thrust of the power.

There are five thresholds in the first edition:

Burdens replace the thresholds in the second edition:

Each Sin-Eater has an Archetype based on how they view their second chance at life and their service as one of the Bound.

The Eight Archetypes are:

Sin-Eaters typically gather in social groups known as krewes, which can range from tiny gangs to global-level death cults (though none of the latter exist in the present day).

In the second edition, the aforementioned archetypes are shifted to these krewes themselves, rather than the Sin-Eaters within them.

The five krewe archetypes are as follows:

It would appear that while Changeling got significantly darker in the transition to the Chronicles of Darkness, the ghostly aspect got a lot lighter. The creators have said that one of the moods of the game is "sugar skulls and New Orleans funerals" — basically, the idea of celebrating life, because you're not dead. Anymore.

A second edition was successfully Kickstarted and is in out. Page needs to be updated.

Not to be confused with the video game Geist.