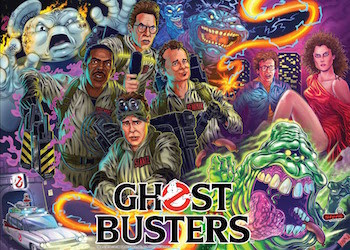 Who ya gonna call?
Advertisement:

Ghostbusters is a Physical Pinball Table designed by John Trudeau, programmed by Dwight Sullivan, illustrated by Zombie Yeti, and released by Stern Pinball in March 2016.

Based on the first and second Ghostbusters movies, this table has you join the Ghostbusters crew in defending New York City. Capture as many ghosts as possible, and consult Tobin’s Spirit Guide for random rewards. Test your psychic ability in the Negative Reinforcement Video Mode, then bring upon Mass Hysteria. Lock three balls to shut down the storage facility and start Multiball to rack up more ghosts. By chasing Slimer away, you can start a scene from the movie. Completing all the scenes in a ladder starts "We Came, We Saw, We Kicked Its...", and completing all nine scenes means We're Ready To Believe You.

The game was released in Pro, Premium, and Limited Edition versions. Premium adds a moving Slimer toy instead of a static one, a holographic “Ecto Goggles” toy over the right ramp, digital magnetic slingshots, and different cabinet art. Limited Edition, which is limited to 500 machines, includes a shaker motor and cabinet art different from the Pro and Premium versions. The full list of differences can be found here.