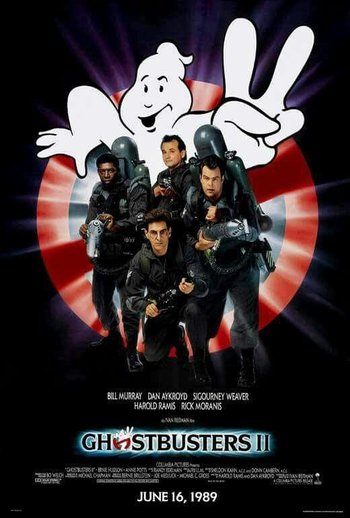 Shit Happens, someone's gotta deal with it, and Who Ya Gonna Call?
WE'RE THE BEST, WE'RE THE BEAUTIFUL, WE'RE THE ONLY...GHOSTBUSTERS!
— Peter Venkman
Advertisement:

Ghostbusters II is a 1989 supernatural comedy and the sequel to Ghostbusters. It was directed once again by Ivan Reitman.

Less than five years later, the City of New York somehow decided the events of the first film were all just some kind of con game (as Peck had described) and sued the heroes, who went bankrupt and have gone on to more mundane jobs: Ray Stantz owns an occult bookstore, Winston Zeddemore (along with Ray) performs in his Ghostbusters uniform for birthday parties, Peter Venkman is a cable TV host discussing the paranormal, and Egon Spengler is doing sociology research. But the ghosts start returning, and soon the Ghostbusters are back in business. Top of their list is investigating a strange river of slime in an abandoned subway tunnel that seems to thrive on negative emotions and produce new ghost hauntings.

Meanwhile, at the museum where Dana works, her boss becomes a Renfield for the ghost of Vigo the Carpathian, an ancient tyrant magically preserved in a painting. Vigo has Dana's infant son Oscar kidnapped, intending to take over the child's body. note As a side note, The Renfield in question actually went on to play Renfield for real in Mel Brooks' spoof Dracula: Dead and Loving It.

We-We-We-We ain't 'fraid of no tropes.

In his panic to get away from the River of Slime as he's being hoisted up, Ray accidentally damages an underground powerline and ends up blacking out all of New York.

In his panic to get away from the River of Slime as he's being hoisted up, Ray accidentally damages an underground powerline and ends up blacking out all of New York.