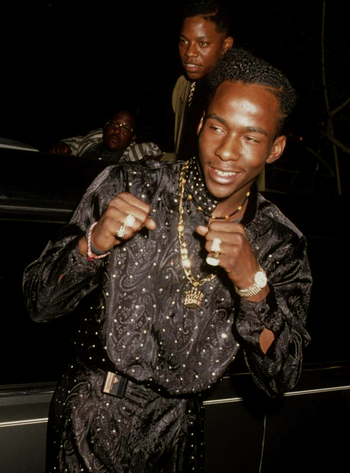 The King of Stage circa 1989, before the drugs

◊.
"I'm the good, the bad, and the ugly of New Edition."
— Bobby Brown, The New Edition Story
Advertisement:

Robert Barisford Brown (born February 5, 1969, Boston, MA), is an American R&B singer/songwriter, dancer, and actor. He's best known for his time with New Edition, his landmark 1988 release Don't Be Cruel and a tumultuous 14-year marriage to Whitney Houston. No, he didn't fuck anyone named Freddie (as far as we know).

Brown initially got his start as a founding member of New Edition in 1978. Brown contributed to several of their hits, including "Cool It Now", "Candy Girl," and "Mr. Telephone Man," which he also co-led. However, alleged jealousy of fellow N.E. member Ralph Tresvant's popularity, along with repeated incidents of singing out of turn and performing suggestive acts during concerts, led to Brown getting kicked out of the group in early 1986 by management.

Not long after his exit, Brown signed with his former group's record label MCA, which had promised him a solo deal if he decided to leave New Edition. Enlisting the help of New Edition manager Steven Machat, Brown wasted little time in recording his solo debut King Of Stage, released in late 1986. Despite a number-one R&B hit with the single "Girlfriend", the album tanked, making Brown's solo career look like a bust.

Brown laid low for a better part of a year working on what eventually became Don't Be Cruel. Working with storied hitmakers such as LaFace, and Teddy Riley, the album adopted the sound of a new style of R&B: New Jack Swing. Released on June 20, 1988 (directly competing with New Edition's Heart Break, which was released the very same day, no less), the album proved to be Brown's breakthrough. It peaked at number one on both the Billboard pop and R&B charts for six and eleven non-consecutive weeks, respectively,note  Don't Be Cruel had its pop chart streak temporarily interrupted by Guns N' Roses' Appetite For Destruction in February 1989, before they knocked it off the top spot for good in March alongside Debbie Gibson's Electric Youth, and the album popped in and out of the R&B chart's top spot multiple times, directly competing with releases from Freddie Jackson, Public Enemy and MC Hammer. and spawned five Top Ten pop hits, including the number-one single "My Prerogative". Brown was nominated for numerous American Music Awards, Grammys, and Soul Train Awards, and was also featured in Ghostbusters II and its soundtrack, giving him a sixth pop hit with "On Our Own", which was only stopped from reaching number-one by Prince's "Batdance" and Richard Marx's "Right Here Waiting". In between all of this, Brown embarked on a 120-day world tour to promote his album. he quickly gained a reputation as R&B's resident bad boy, as he often simulated performing sexual acts during his live shows, which often got him in trouble with the police.

The early nineties continued to be busy for Brown. He contributed vocals to Ralph Tresvant's "Stone Cold Gentleman", Glenn Medereios' "She Ain't Worth It", which earned Brown his second number-one single, and Bell Biv DeVoe's "Word To The Mutha!", which reunited all of the original New Edition members on record; plus Johnny Gill, who had joined the group in 1987.

1992 saw the release of his third solo album Bobby, and his marriage to Whitney Houston, who he first met at the 1989 Soul Train Awards. Although Brown continued to find success on the charts, he was greatly overshadowed by his wife's success, not helped by her appearance in the 1992 film The Bodyguard. Both Brown and Houston's drug addictions began in this decade, and Brown soon became tabloid fodder for his violent tendencies towards Whitney. Despite the controversies, Brown continued to record and tour.

1996 saw an official New Edition reunion with their sixth album Home Again. Although the album and its singles were massively successful commercially and critically, the resulting tour proved disastrous thanks to years-old beef between Brown and the rest of New Edition flaring up once more, along with Brown struggling with alcoholism and other drug addiction during the tour. The lowlight of the tour came during a show in La Cruces, New Mexico, where Ronnie DeVoe attempted to pull Brown, who was deliberately extending his solo set, off stage. The resulting fistfight, which led to the singers' personal security guards getting involved and guns being drawn, led to the show being shut down. Both Brown and Michael Bivins would leave the tour not long after.

Things continued to slide downhill for Bobby in the following years. His fourth solo album Forever and its lead single "Feeling Inside" flopped hard, resulting in him getting released from MCA Records. The turn of the millennium saw him returning to contributing guest vocals for other artists and continuing to be tabloid fodder. After a brief time as reality stars in the show Being Bobby Brown, Whitney Houston filed for divorce in 2006, which was eventually finalized in 2007, ending her fourteen-year marriage to Brown.

Despite a second New Edition reunion and a fifth album (The Masterpiece), Brown had a particularly nasty Trauma Conga Line between 2011 and 2015. Both of his parents died within a year of each other (his mother in 2011, his dad in 2012), and Whitney had unexpectedly died in February 2012, six days after his 43rd birthday. During a New Edition concert in Mississippi, he broke down into tears during a performance when he got the news, shouting "I love you, Whitney!" To twist in the knife further, Bobbi Kristina, his only child with Houston, died three years later at the age of 22 in eerily similar circumstances. His son Bobby Brown Jr. was found dead in his home in November 2020.

Despite the ups and downs of his career and life, Brown is still highly respected for helping pioneer the New Jack Swing sound and helping shape Contemporary R&B into what it is now. Two miniseries about his life and career were released in 2017 and 2018: The New Edition Story and The Bobby Brown Story

"Every little trope I make, examples will be there..."