It Came from the Sink 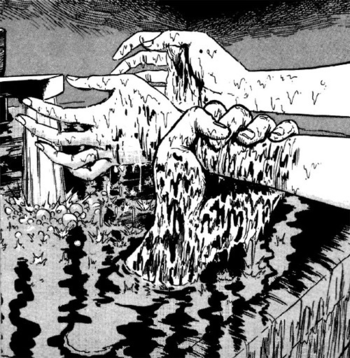 This is not the way we wash our hands.
Advertisement:

Something comes from a drain or a faucet of some sort as an early sign that things aren't quite right or just as a form of unsuspected horror. Blood, bugs, wads of hair or even the monster itself are popular choices. Blob Monsters, in particular, really like to invade sewer systems. In some works, it can be part of a delusion a character is having during a mental breakdown.

Depending on the situation, this may also be a sign of either some kind of supernatural effect making things work like they shouldn't, something infiltrating the building through its sewage or water pipes, or simply a sign of severe uncleanliness and deteriorating hygiene.

Not to be confused with It Came from the Fridge, which refers to over-aged leftovers developing into new forms of life.