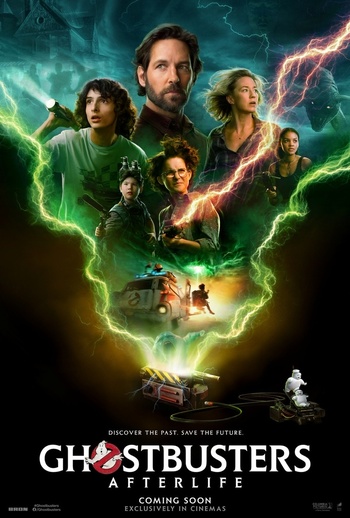 "Have you missed us?"
"Call it fate. Call it luck. Call it karma. I believe that everything happens for a reason."
— Peter Venkman, Ghostbusters
Advertisement:

Ghostbusters: Afterlife (titled Ghostbusters: Legacy in some countries) is a 2021 supernatural adventure film set in the Ghostbusters franchise, written and directed by Jason Reitman (the son of Ivan Reitman, who directed the first two films and produces this one) and co-written by Gil Kenan of Monster House fame. It is the direct sequel to Ghostbusters II, disregarding the 2016 reboot.

Two siblings, Trevor (Finn Wolfhard) and Phoebe (Mckenna Grace), move to the small town of Summerville, Oklahoma with their single mother, Callie (Carrie Coon) after she inherits property from their late grandfather. When the town experiences a rash of unexplained earthquakes, the kids — with the help of science teacher Mr. Grooberson (Paul Rudd) — discover their family's link to the original Ghostbusters, and the secret legacy their grandfather left behind.

The film was originally scheduled for a 2020 release, but due to the COVID-19 Pandemic, it was ultimately delayed to November 19, 2021. 3 months before release, the film had a surprise premiere at CinemaCon on August 23, 2021. It also got another announced premiere at Lucca Comics&Games, an Italian comic book and fiction-based convention, on October 31, 2021 (for an Halloween night event), right after the full reopening of cinemas after the long COVID-19 Pandemic related stop in the country.

At CinemaCon 2022, another Ghostbusters film

was teased. It is currently unknown if it will be a sequel to Afterlife or a separate installment.

I ain't 'fraid of no tropes!

Tropes E to J
Tropes K to W
For Harold