Pull Yourself Down the Spear 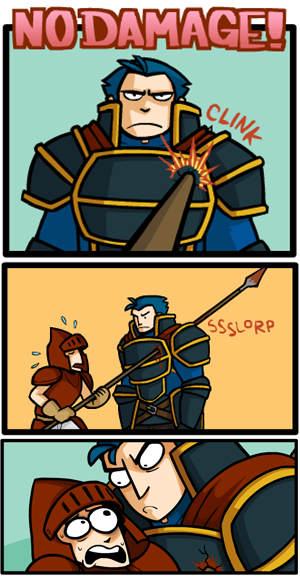 It was at this moment, that he knew...
Advertisement:

Impalement is pretty much guaranteed to kill the victim, but occasionally someone will demonstrate their toughness, imperviousness to pain, or sheer Determination by pulling themself down whatever's stuck in them to get to their attacker.

Can be Truth in Television, as being impaled through the belly would mean a slow death from sepsis if blood loss and shock didn't do the job, and the impaled person could be running on enough adrenaline to have the strength to pull this off, provided the weapon wasn't designed to prevent this.

This trope can also apply to someone stabbed in their extremities, such an as Impaled Palm, who could possibly even survive their injury.

Subtrope of Impaled with Extreme Prejudice. Compare Deliberate Injury Gambit. One of the ways to make an opponent Left Stuck After Attack.