Literature / Knights of the Borrowed Dark 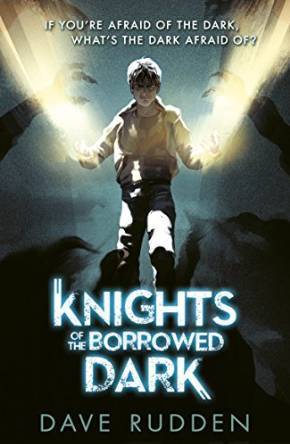 Knights of the Borrowed Dark is a 2016 middle-grade fantasy novel written by Dave Rudden.

Denizen Hardwick is an orphan. And he has been for eleven of his thirteen years of life—that is, until he's contacted by an aunt he's never heard of before and sees her colleague destroy a reality-defying shadow monster with spoken sunrise.

He's taken to a place called Seraphim Row, a candle-lit mansion of secrets, and learns that creatures called the Tenebrous tear into our world through the shadows. And his aunt is part of an ancient order of Knights who fight to beat them back. Not only that, but Denizen has fire in his own bloodstream, giving him the potential to join their fight... and possibly finally get answers about his parents as well.

The Forever Court takes place six months later, with the Order still dealing with the aftermath of the events of the first book and the implications it carried. And nowhere are the effects felt stronger than in Seraphim Row. But as Denizen is adjusting to his new life of Knighthood, the Order receives an unexpected letter from the Tenebrous. And not only that, but another dangerous power is gathering in preparation for war...

The final book in the trilogy, The Endless King, came out 2018 and follows Denizen and his friends as they travel to the Order's ancestral home, Daybreak. It isn't long before a shocking arrival comes bearing the even more shocking news that the Tenebrae's leader has fallen—and with Usurpers targeting Daybreak, real war is rising.

Knights of the Borrowed Dark contains examples of