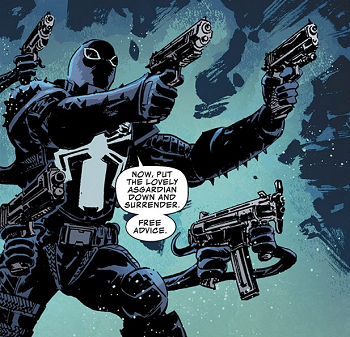 Becoming Venom isn't cause for Flash to throw away his Army training.
Jake: I thought your power was eyebeams, 'Cyclops', not Kung Fu.
Cyclops: That's not my power. That's my training. I was taught it.
— A vs X: Consequences
Advertisement:

Some heroes win the Superpower Lottery. Super Strength, Eye Beams, and Energy Blasts make issuing a No-Holds-Barred Beatdown a relatively straightforward matter. So Once Again, the Day Is Saved. Hooray and stuff.

Then there's the rest of them. They have bonafide powers that set them apart from Puny Earthlings, but for one reason or another, they either can't or won't just rely on them alone. They've taken Boxing Lessons For All Those Other Poor Schmucks and fight very similarly to a Badass Normal most of the time. This can be for any of several reasons:

This trope was also an inadvertent side-effect of Coconut Superpowers in old shows and serials due to a lack of the special-effects technology to properly depict fantastic powers.

Compare Boxing Lessons for Superman, where trained fighting is an optional extra the character takes to help with extreme circumstances; and Guile Hero, where they prefer trickery to outright confrontation. This trope can overlap with Empowered Badass Normal if the character still needs to mostly rely on previous fighting skills post-upgrade. Brought Down to Badass is when the fighter remains effective in battle despite losing their powers and has no choice but to fight like a normal.

Contrast Powers Do the Fighting, where the fighter does nothing at all and their abilities are still more than enough.

Related to Afraid of Their Own Strength, as this can be one of the ways a character keeps themselves in check to avoid unnecessary damage or harm.

NOTE: A depowered character such as a Henshin Hero only counts if they can voluntarily switch them on and off at will and keeps them shut off most of the time, in which case they're Willfully Weak. The character must have a choice whether or not to (try to) utilize their powers to qualify for this trope, or otherwise have powers which have no bearing on combat that can't be realistically replicated (such as Longevity, which would remove them from Badass Normal territory). Also, if Everyone is a Super then fighting with powers is normal — in such a setting, someone who can't or has reason to avoid doing so is actually a Handicapped Badass.

This trope fought its way into these works the old-fashioned way because its Wiki Magic was just Too Awesome to Use:

He might be packing reality-warping powers thanks to his Halo, but that doesn't stop him from gunning down Agents.

He might be packing reality-warping powers thanks to his Halo, but that doesn't stop him from gunning down Agents.