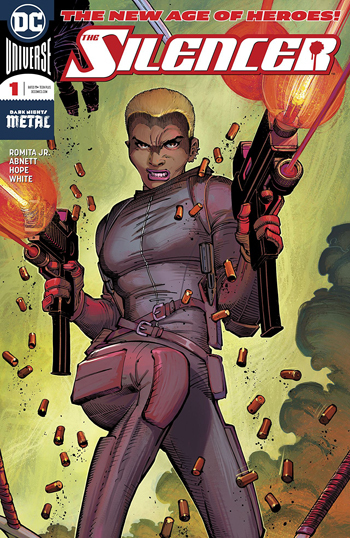 She’s one of the DC Universe’s deadliest assassins... and you’ve never heard of her.
Advertisement:

The Silencer is a 2018 monthly comic book from DC Comics launched as part of The New Age of Heroes line, a quasi-spinoff from Dark Nights: Metal. The series is written by Dan Abnett and is mainly illustrated by Jack Herbert and Patrick Zircher (although John Romita Jr. and Viktor Bogdanovik illustrated the early issues).

Honor Guest was once the deadliest assassin employed by the shadowy Leviathan organization, and a personal friend of its leader, Talia al Ghul. In addition to her skills as a trained killer, Honor also possesses the ability to create a field around her that prevents sound from escaping it.

Honor eventually began to despise her job and wished for a normal life. After completing one final hit on another, traitorous Leviathan agent, Talia allowed Honor to retire in peace. Years later, after building a family and a quiet suburban life, Honor is thrust back into the business when another Leviathan member attempts to assassinate her on a shopping trip, since it turns out Honor's last job as pushed Leviathan into a civil war, one that she is now on the wrong side of.

The Silencer contains examples of: