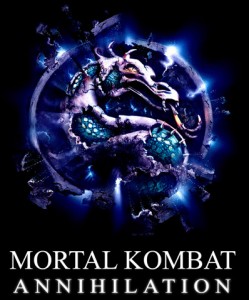 The One Where Johnny Cage dies.

Mortal Kombat: Annihilation is the second film based on the Mortal Kombat franchise. It incorporates characters and plot details from the series' first four games with a heavy emphasis on Mortal Kombat 3.

While Raiden (James Remar) confronts the Elder Gods over Kahn's invasion, Liu Kang undergoes specialized training in order to face Shao Kahn (who has far more power than Shang Tsung ever did), and Sonya Blade (Sandra Hess) reunites with her partner Jackson "Jax" Briggs (Lynn Williams) to help him fight various Outworld warriors as they arrive on Earth.

Shao Kahn's Outworld forces outnumber and overpower Earthrealm's, however, and it will take every ounce of skill and power Earth's heroes have to drive back the invasion and defeat Shao Kahn once and for all.