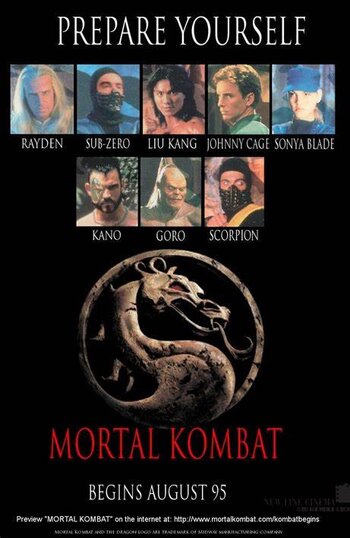 Let Mortal Kombat begin!
"I have looked into their souls... and yours. One of you three will decide the outcome of the tournament. The fate of billions will depend upon you. Heh heh heh heh... sorry."
— Raiden
Advertisement:

Mortal Kombat is a 1995 film directed by Paul W.S. Anderson and distributed by New Line Cinema. Based on the long-running Mortal Kombat fighting game franchise, it incorporates elements from the series' first two games, with a decided emphasis on the first.

Martial artist Liu Kang (Robin Shou), U.S. Special Forces agent Sonya Blade (Bridgette Wilson), and Hollywood superstar Johnny Cage (Linden Ashby) meet each other as they travel to an uncharted island for an underground fighting tournament. The God of Lightning and Thunder, Raiden (Christopher Lambert), tells them about the tournament's true purpose: Mortal Kombat will determine Earth's fate in the face of an invasion. Outworld, a realm that exists parallel to Earth's, requires victories in ten consecutive Mortal Kombat tournaments — each tournament held once a generation — to open a portal that would let Outworld's forces invade Earthrealm and conquer humanity. With nine straight victories thus far, Outworld stands ready to wage a war that Earthrealm cannot possibly win.

The three protagonists each have a personal reason for competing: Liu Kang wants to avenge his brother's death, Sonya seeks to bring a violent killer to justice, and Johnny desires validation of his skills as a martial artist. Raiden serves as their mentor and guide throughout the tournament, and the trio soon finds a sympathetic voice from Outworld in Princess Kitana (Talisa Soto). But Outworld's forces did not come unprepared for a challenge: sorcerer Shang Tsung (Cary-Hiroyuki Tagawa), his chosen champion Goro (Kevin Michael Richardson/Frank Welker), elite soldiers Sub-Zero (François Petit) and Scorpion (Chris Casamassa), and Sonya's nemesis Kano (Trevor Goddard) all seek to win the tournament and help Outworld start its invasion.

It has a sequel, Mortal Kombat: Annihilation. 2021's Mortal Kombat film is a Continuity Reboot for the live-action franchise.