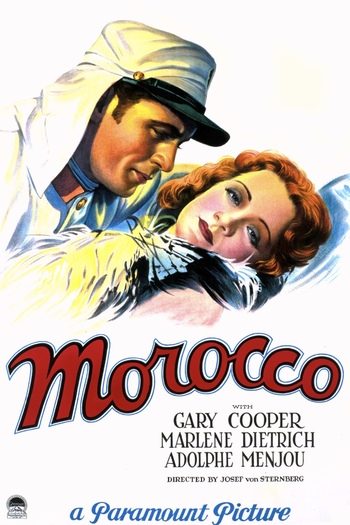 "There's a foreign legion of women, too. But we have no uniforms, no flags, and no medals when we are brave, no wound stripes when we are hurt."
Advertisement:

Morocco is a 1930 talking romantic drama film directed by Josef von Sternberg, starring Marlene Dietrich, Gary Cooper, and Adolphe Menjou. It is regarded as an iconic example of Pre-Code cinema.

It follows the story of Amy Jolly (Dietrich), a beautiful cabaret singer, who comes to Morocco looking for a new life. She meets Tom Brown (Cooper), a private of the French Foreign Legion, who has, just like her, enlisted to forget his past. They start to fall in love, but she is also courted by a rich bon vivant La Bessière (Menjou).

Tom Brown used to have a love affair with his superior adjudant Caesar's wife. He breaks up with her, and she revenges by hiring a couple of thugs to murder him. He ends up defeating them, but Caesar, already knowing about the adultery, orders Tom to leave the city with his regiment. Tom suspects that Caesar is planning to kill him, and considers deserting and running away with Amy, but, after all, decides she would be happier with a rich man and leaves Morocco. Their regiment runs into a machine gun nest. Caesar orders Tom to take on it alone, but then joins him, turning it from a Uriah Gambit into a kind of duel by proxy. Tom survives, but Caesar is killed.

Furious with Tom leaving her, Amy accepts La Bessière's proposal. However, during their engagement party, Tom's regiment returns without him. A soldier tells Amy that Tom was wounded and they left him in a hospital in Amalfa. La Bessière takes Amy there by his car, telling the guests that he loves her and wants her to be happy. She finds out that Tom is alive and well, and is departing the next morning. Seeing a group of women who follow the Legion for the soldiers they love, Amy joins them and walks into the desert.

In 1992, the film was selected for preservation in the National Film Registry.