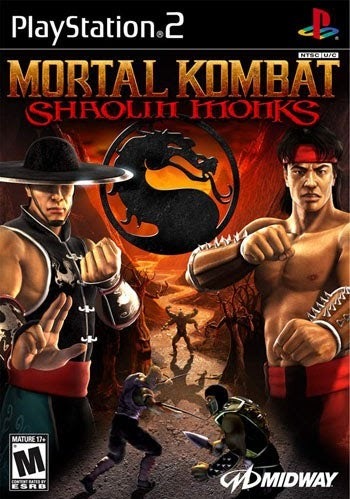 Out of the arena and into the adventure!
The battle raged at the end of the first tournament. The forces of Earthrealm were facing their greatest challenge...
Advertisement:

Mortal Kombat: Shaolin Monks is an action game released in 2005. Based on the events that occurred at the end of Mortal Kombat leading into Mortal Kombat II and its final confrontation with Shao Kahn, players take on the role of Liu Kang and Kung Lao as they fight to defend Earthrealm.

The story begins with Earthrealm's warriors battling for their lives against Outworld's forces on Shang Tsung's island fortress. Liu Kang eventually confronts the sorcerer and gains the upper hand against him, only for Goro to enter the fray. While the heroes are distracted by this new threat, Shang Tsung is able to open a portal to Outworld and retreats with his evil allies as the fortress begins to crumble around them. Escaping, Liu Kang and Kung Lao find the Wu Shi Academy under attack from Baraka and his Tarkatans. Defeating them the duo decide to meet the threat head on, despite the odds, and battle through Outworld itself to face Shao Kahn in person.

The game was welcomed by fans and critics alike for being an enjoyable fatality-filled action beat 'em up; no doubt in part to the last two Spinoff games, Mythlogies and Special Forces, being less than stellar.

Whilst the gameplay and bloodshed was greeted with joy, many story elements were not. Kung Lao's character was now arrogant, jealous of Liu Kang becoming champion and no longer the reluctant warrior of his original introduction. Many established canon story elements and characters were now changed or completely altered. Whether the game was intended as a Broad Strokes approach to the story, a Retcon, an Alternate Continuity or simply a case of Midway not knowing their own continuity is up for debate. Needless to say the fans have their own opinions on the matter.