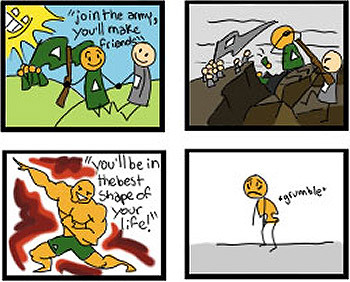 Now that's just mean.
"Oh Sergeant is this the adventures you meant,
When I put my name down on the line
All that talk of computers, and sunshine and skis
I'm asking you Sergeant, where's mine?"
— Billy Connolly, "Sergeant Where's Mine?"
Advertisement:

So, you've graduated high school, and now you're ready to tackle the world! And what better way to do so than by doing a few years in the Army? The recruiter, who is totally trustworthy and would never mislead you, explained the whole thing to you. You ship out for Basic, get some cushy job in Intel or something, and you can get stationed in Hawaii or Germany, and you get all these great benefits!

Except that's not the case. You ship off to Basic, get chased around and screamed at by some wacky guy with a big hat, you got slotted into the Infantry, you've been assigned to a crappy base in some redneck part of the Deep South, your barracks are crappy, the food is worse, and you just found out you're being deployed to some burning hot desert on the other side of the world for the next year and a half. How could the recruiter let this happen to you!?

A sister trope to "Join the Army," They Said, which is about the recruitment pitches themselves, although the Stock Phrase itself is likely to be used in regard to this trope. It is worth noting that not all recruiters are like this, but amongst the military, they can have a reputation not entirely unlike that of Honest John's Dealership.

"We'll have you flying"

The Empire has some nice recruiting advertisements. Cut to three years later, with troopers unglamorously dying in the mud on Mimban and Han trying to survive in this hell.

Example of:
"Join the Army," They Said

"We'll have you flying"

The Empire has some nice recruiting advertisements. Cut to three years later, with troopers unglamorously dying in the mud on Mimban and Han trying to survive in this hell.