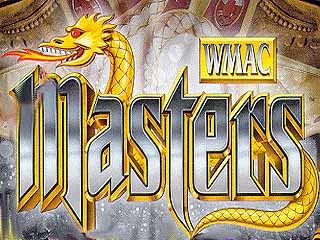 WMAC Masters is a choreographed martial arts competition show produced by 4Kids Entertainment, and syndicated by the company's "Summit Media Group" division.note They are essentially the same company, founded as a division of licensing agency Leisure Concepts Inc. (LCI). The company is known today as "4Licensing", but is no longer involved with TV production of any kind.
Advertisement:

WMAC stands for the World Martial Arts Council, an organization dedicated to the competition of the world's best martial artists, all competing for the "ultimate prize", the Dragon Star, which acts as a championship belt of sorts. For the most part, these competitions take the form of one-one-one martial arts battles, though other demonstrations and tournaments are shown.

Clearly the inspirations are both Professional Wrestling (each of the fighters has a gimmick and there is kayfabe) and fighting games (with such things as life bars, the general aesthetics of the characters and different areas where matches take place, and even a couple actors from the Mortal Kombat games appearing, such as Ho-Sung "Superstar" Pak, who played the original Liu Kang; also, from The Movie, Chris "Red Dragon" Cassamassa (Scorpion) and Hakim "The Machine" Alston (Liu Kang's first fight)).

The first season was hosted by Shannon Lee, the daughter of Bruce Lee, and was an aesop of the week show, with life lessons imparted in every episode. The second season dropped the host aspect, limited the aesops to And Knowing Is Half the Battle segments at the end, and introduced an Evil Counterpart organization, Jukido, that sought to usurp the Dragon Star in a Myth Arc (which is left unresolved by the end of the seriesnote It didn't help that the very final scene has a shocking betrayal...).

This Show Demonstrates Examples of the Following Tropes: