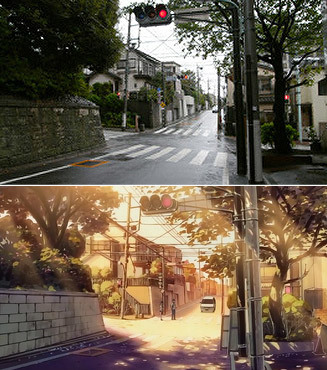 Holy crap, that is my house!
"She refers to a phenomenon of moviegoing which I have called certification. Nowadays when a person lives somewhere, in a neighborhood, the place is not certified for him. More than likely he will live there sadly and the emptiness which is inside him will expand until it evacuates the entire neighborhood. But if he sees a movie which shows his very neighborhood, it becomes possible for him to live, for a time at least, as a person who is Somewhere and not Anywhere."
— The Moviegoer
Advertisement:

Locations used for this purpose tend to become the subject of Tourist Bump; for anime and manga, it's common for otaku to make "pilgrimages" to real life locations featured in their favorite series, a prime example being the Washinomiya shrine, the basis for the Hiiragi family's shrine in Lucky Star.

This is far more common in TV shows, comics and games that are set in real places (e.g., New York, Tokyo, or Paris). This often results in the Eiffel Tower Effect.

See No Communities Were Harmed when the setting is highly recognizable, but never gets mentioned by its proper name. Even a mix is possible, when the town is never mentioned by name, but settings like train stations or streets are. Attention to detail in backgrounds is one possible aspect of Shown Their Work.

Not to be confused with GIS Syndrome.