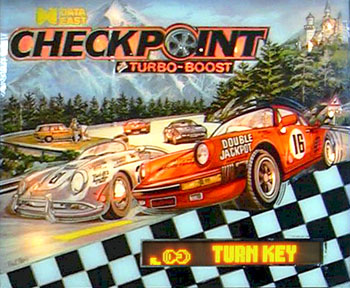 Checkpoint is a Physical Pinball Table designed by Joe Kaminkow and Ed Cebula, with art by Paul Faris and music by Brian Schmidt. It was released in February 1991 by Data East.

The goal of the game is to drive your Porsche Carrera to victory in eight rally races around the world. Build up those RPMs for multiball, hit the Spin-N-Win, then start Fast Mode for a ten-second scoring frenzy. Punch the Hot Nitro to get the Blue Light Special and Redline your way to the Checkered Flag. For extra glory, race through the Lasermatic Speed Gun and set a new speed record, then hit the Checkpoint for Double Bonuses.

Though it was the first pinball machine to let players choose their own music, Checkpoint is most famous as the first game to feature a Dot Matrix Display, allowing for attention-grabbing animations, status indicators, and storytelling capabilities. While pro players disregard the game for its uneven random rewards and over-reliance on shooting the ramp, casual players enjoy it for providing uncomplicated fun in an appealing package. Unfortunately, games often have cracked ramps and broken drop targets due to the extra-strong flippers, while the DMD is difficult to replace due to its nonstandard size. Older tables end up being cannibalized for parts, increasing the rarity and price of the ones that remain.

"Head for the checkpoint!"