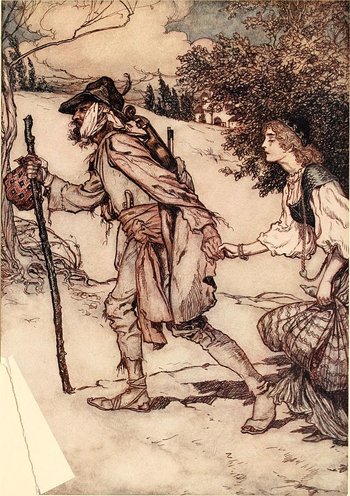 "King Thrushbeard" is a fairy tale published by The Brothers Grimm.

A king has a daughter who is so beautiful that kings and princes come from miles around in hopes of winning her hand in marriage. But although she is beautiful, she is also proud and arrogant, and constantly insults and rejects her suitors. She is particularly cruel to one handsome young king, calling him "King Thrushbeard" because of his long thick beard. Finally, her father loses patience with his rude daughter and declares that since she has rejected every man who has come to court her, she will be married to the first beggar who comes to the gate.

The next day, a clean-shaven minstrel arrives at the palace and the king is so pleased with his music that he marries the man to his daughter. The princess is very angry but has no choice in the matter. As she and her new husband depart, they pass by lands and properties that belong to the king the princess dubbed "King Thrushbeard". She starts to regret rejecting him, even more so when her new home turns out to be nothing more than a wooden shack.

Now forced to work, the princess proves to be completely incompetent at household tasks, weaving, and spinning. She has some success for a time selling pottery, but that comes to an end when a drunken soldier smashes her stall. Finally, she is forced to work as a scullery-maid in the palace of King Thrushbeard. The one silver lining is that her new position enables her to take home scraps of food for herself and her husband to eat.

One day, a great party is held to celebrate the king's engagement, and the princess watches from behind a curtain until she is discovered by none other than King Thrushbeard himself. Despite her attempts to escape, he pulls her onto the dance floor and all the food she had hidden in her apron spills out. Completely and utterly embarrassed, she tries to flee but is stopped by the king, who reveals that he is also the beggar she married and the soldier who destroyed her stall. Her ordeal was both meant to cure her proud ways and to punish her for her haughtiness. With that, they marry and live happily ever after.

It was adapted to webcomic by Erstwhile: here