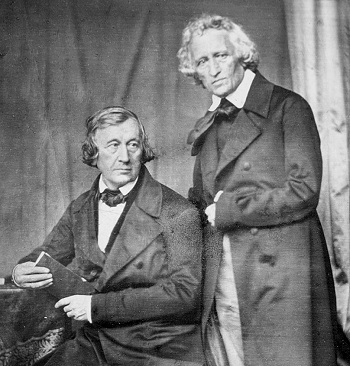 Jacob Ludwig Carl (4 January 1785 – 20 September 1863) and Wilhelm Carl Grimm (24 February 1786 – 16 December 1859), known collectively as The Brothers Grimm, were German linguists born in the late 18th century, who, in an effort to preserve Germany's heritage and promote cultural unity in a period of political disunity, collected a vast array of folk tales from their fellow Germans (mostly middle- and upper-class friends). The brothers eventually published these stories in the famous collection which they called Kinder- und Hausmärchen (Children's and Household Tales), but which is generally better known among English-speakers as Grimms' Fairy Tales. Germans of a certain generation may know their faces from the last issue (1990-2002) of German banknotes where they appeared on the DM 1000 ,- note.

, in the Project Gutenberg

and the World of Tales

Although the Grimms' collection does contain a version of "Cinderella" ("Aschenputtel"), the better known version is based on an earlier story by Charles Perrault. "Sleeping Beauty" and "Little Red Riding Hood" also appeared first in Perrault, but the Grimms' versions ("Dornröschen" and "Rotkäppchen") are better known. One of their stories, "The Summer And Winter Garden", is usually referred as "Beauty and the Beast", and even though the stories follow the same formula, they begin and end slightly different, and despite popular belief, Brothers Grimm did not write "Beauty and the Beast".

), wrote the first bit of the German dictionary, and were two out of the "Göttingen Seven," the prominent liberal professors at Gōttingen University whose dismissal by the autocratic Ernst August, King of Hanover (who, somewhat confusingly, was born and raised in the far more liberal Britainnote He was George III's son and Queen Victoria's uncle, and held the British title Duke of Cumberland long before reigning in Hanover. He was also something of the black sheep of his generation of Hanovers, who were generally perfectly happy with the comparatively liberal British system and found Ernest's reactionary conservatism off-puttingly German.) caused a major stir in 1830s Germany.

The Grimms were the subject of a highly fantasticated Musical Biopic in 1962, called The Wonderful World Of The Brothers Grimm, with Karlheinz Böhm as Jacob and Laurence Harvey as Wilhelm; the film won 1 Oscar (Costume Design) and was nominated for 3 more. In 1998, the brothers, played by Andy Henderson and Joerg Stadler, made an appearance in Ever After: A Cinderella Story (despite the film being a riff more on the Perrault than on the Grimm version of "Cinderella"). In 2005, Terry Gilliam made The Brothers Grimm, a decidedly unsettling reinterpretation; Heath Ledger and Matt Damon were the brethren in this outing. The Grimms in the form of Allen Smith and Millen Baird were deconstructed in the 2006 film Big Bad Wolves.

The Grimms, this time portrayed by Dean Jones and Paul Sand, were also the subject of a well-remembered 1977 TV movie, Once Upon a Brothers Grimm, which was nominated for 5 Emmys, winning 2. They also had cameos in the webcomic Hetalia: Axis Powers, working with the Anthropomorphic Personification of Prussia.