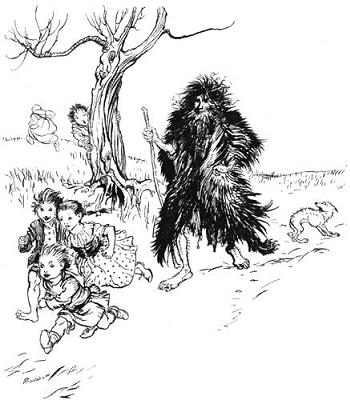 Bearskin is a German Fairy Tale collected by The Brothers Grimm.

A soldier can not return home after he leaves the army, and can not find a job. Desperation drives him to make a deal with the Devil, who makes a bet with him. For the next seven years, he will carry a purse of gold that's always full. However, he must wear a bearskin and neither pray nor wash nor cut his hair in all that time. If he survives, he can keep the purse, but if he dies, the Devil gets his soul.

The soldier spends several years Walking the Earth, giving away gold to the poor and asking them to pray for him. One night he rescues an old man from prison for debt, and the man promises the hand of one of his daughters in gratitude. The older two reject him, but the youngest agrees, knowing that only a good man would have rescued her father. He gives her half of a ring and asks her to wait for him, telling her if he doesn't return after three years, she is free to marry someone else.

He survives to the end of the term, gains the gold purse, and cleans himself up before visiting the old man again. Everyone but the youngest daughter takes a keen interest in the handsome newcomer, especially when he says he's come to seek a bride. The older girls go to pretty themselves up, letting him reveal himself to the youngest girl in private — by showing her the other half of the ring. They marry in great joy, but the older sisters are eaten alive with envy and ultimately kill themselves. The Devil is pleased: he got two souls instead of one.