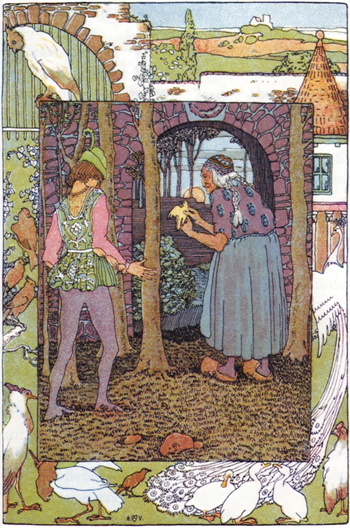 "Jorinde and Joringel" (German: Jorinde und Joringel) is a German Fairy Tale collected by The Brothers Grimm and published in their Children and Household's Tales (Kinder- und Hausmärchen) collection. It is the number 69 tale.

Once Upon a Time, two young lovers, Jorinde and Joringel went for a walk in the woods. Unbeknownst to them, the woods are home to a wicked witch who transforms unlucky travelers, changing women into birds and men into statues in her castle. Of course, Jorinde and Joringel quickly become her next victims. However, she decides to set Joringel free after taking away Jorinde, content with that the lovers will never see each other again.

Some time later, Joringel has a strange dream about a magic flower that can break the witch's spells. For nine days, he searches for it, then returns to the witch's castle. He's immune to her petrification spell, and when she tries to flee with one specific nightingale, he realizes that must be Jorinde. He then touches the witch with the flower, taking away her magic. He then breaks the spell on Jorinde, then the several hundred women-turned-birds and men-turned-statues in the castle, and Jorinde and Joringel live Happily Ever After.

In the Aarne–Thompson–Uther Index, it is classified as a Type 405.

Jorinde and Joringel is one of the tales adapted in Grimm's Fairy Tale Classics.

Both characters are featured in Anna's Quest.

"Jorinde and Joringel" contains examples of: