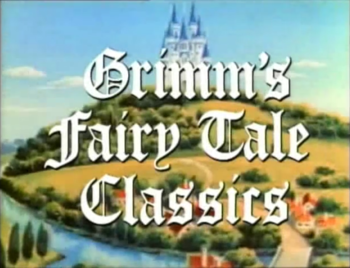 The anime was based on the stories by The Brothers Grimm and a number of other authors. Each story was told in a half-hour format. Some stories, like "Cinderella" and "Puss in Boots" were aired in two parts; "Snow White" was aired in four parts. Most episodes were somewhat faithful to the original stories, with various changes made to suit the half-hour episode run.

Can be seen as a Spiritual Successor to Andersen Monogatari or to Manga Sekai Mukashi Banashi (aka Tales of Magic). It also came a year after Nippon Animation gave the Japanese literary tradition a similar treatment with Animated Classics of Japanese Literature (Seishun Anime Zenshu) (although that series aired on Nippon Television).

Discotek Media released the complete series uncut in two Blu Ray sets in 2021. This release features both the English dub and the original Japanese language with subtitles. The first season of the English dub is available for purchase on Amazon Prime.