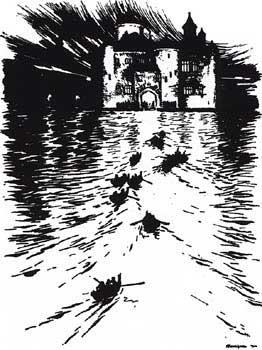 Arriving for the dance
Advertisement:

(or "The Worn-Out Dancing Shoes" or "The Shoes that were Danced to Pieces", original: "Die zertanzten Schuhe") is a German fairy tale originally published by The Brothers Grimm in Children's and Household Tales as tale number 133. Charles Deulin collected another, French version in his Contes du Roi Cambinus (1874), which Andrew Lang included

Twelve princesses sleep in twelve beds in the same room; every night their doors are securely locked, but in the morning their shoes are found to be worn through as if they had been dancing all night. The king promises his kingdom and a daughter to any man who can discover the princesses' secret within three days and three nights, but those who fail within the set time limit will be put to death.

After many princes have tried and failed to solve the mystery, and old soldier traveling through a wood meets an old woman who advises him to take on the challenge. She gives him an invisibility cloak and tells him not to eat or drink anything given to him by one of the princesses who will come to him in the evening, and to pretend to sleep after the princess leaves. After reaching the castle, he follows the advice, secretly disposes the wine offered to him by a princess, and pretends to fall asleep.

The princesses, convinced that the soldier is asleep, dress themselves in fine clothes and escape from their room by a trap door in the floor. The soldier dons his invisibility cloak and follows them down. The passageway leads them to three groves of trees: one of silver, the second of gold, and the third of diamonds. The soldier breaks off a twig from each as evidence. They walk on until they come upon a lake, and twelve boats with twelve princes in them ferry them to a castle on the other side, with the soldier hiding in the boat of the youngest princess. The princesses enter the castle and dance the night away until their shoes are worn and they need to leave.

This continues a second and third night and on the third night the soldier carries away a precious cup from the underworld castle as evidence of his adventure. When the time comes for him to declare the princesses' secret, he presents the king with the three branches and the golden cup, and tells the king all he has seen. The princesses see there is no use to deny the truth and confess. The soldier takes the eldest princess as his bride and is made the king's heir.

The story has been adapted several times to that of television and movie format, as well as used as the inspiration for some novels and parts of stories such as Jeanette Winterson's Sexing the Cherry.

Tropes in "The Twelve Dancing Princesses":