The Hedge of Thorns 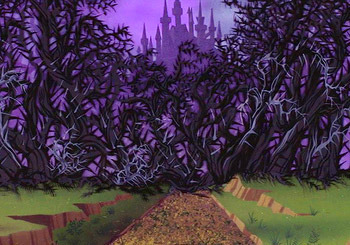 "A forest of thorns shall be his tomb!"
Advertisement:

A classic trope usually seen within the Fantasy genre, the Hedge has both a literal and metaphorical purpose within any story that features it.

Physically, it is a place of painful passage, thorns and brambles, that acts as a hazard for the main character(s) as they try to either pass it, or escape it. More often than not, it is connected to fairies (Fae) or some other mysterious group of creatures, as the trope is linked to the idea of a natural barrier to some greater prize (or terrible horror). Fantasy-wise, the Hedge usually appears within enchanted forests. However, sometimes the Hedge is conjured by a "higher power," and thus can appear anywhere the summoner demands. Also, the thorns tend to quickly eat whatever dies or lets its guard down within it.

The Hedge is most often a home for various forms of life, whether carnivorous or not. Sometimes it's a kingdom in-and-of itself, being ruled by an Evil Overlord, Sorceress, Bandit King or similar character. Outside of the previously stated genre, the Hedge can be a torturously difficult labyrinth made from plants and fungi, or a hideaway for smaller characters against the Big Bad.

Metaphorically, however, the Hedge of Thorns can stand for something that tears at the psyche as well as the body of anyone who tries to get through it (fairies often are linked to madness). It also acts as a test of character, since it can stand between the Hero(ine) and the Bright Castle that holds what (s)he seeks. Usually the ordeal of the Hedge, as previously stated, is one of mental endurance and brinking on insanity, since it questions one's principles and bravery, as well as capability to adapt to the harshness of the reality that exists within the Hedge.

Note: the Hedge can also be a catch-all term for lands belonging to the Fae.