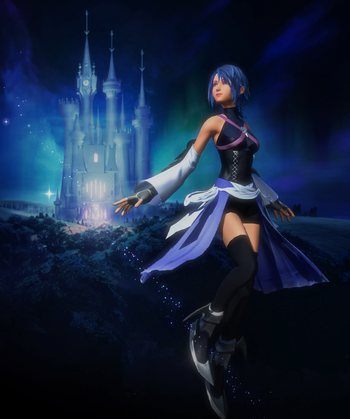 "There is always a way."
"To spend one more night beneath the stars with my best friends..."
— Aqua
Advertisement:

The game is about the length of one Kingdom Hearts III world, and focuses on Aqua, one of the three viewpoint characters of Birth by Sleep, who is trapped in the Realm of Darkness after her adventures in that game. Aqua investigates worlds trapped alongside her in the dark realm, and struggles to keep going, her hope and faith in jeopardy.

Besides elaborating on some lingering plot threads and teasing new ones, the game primarily demonstrates the graphics and gameplay that were being developed for III's. Several mechanics were saved for a proper debut in III, but this game gives an early introduction to Situation Commands, contextual techniques that appear at the end of certain combos. These can allow Aqua to enter a Style Change, which alters her normal attack combo, or trigger powerful finishing moves. Aqua also retains her Shotlock ability from Birth by Sleep, which also returns in III.

The Realm of Darkness

A timeless, infinite, polymorphic world that preys on the weak and is the original homeworld of the purebred Heartless.

The Realm of Darkness

A timeless, infinite, polymorphic world that preys on the weak and is the original homeworld of the purebred Heartless.