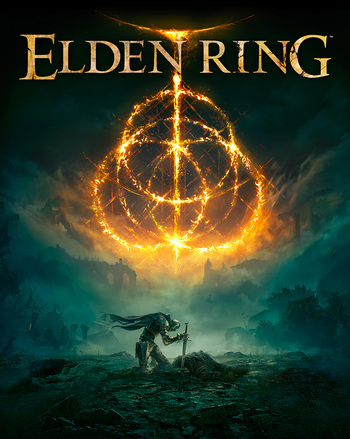 Elden Ring is a Wide-Open Sandbox Action RPG developed by FromSoftware and published by Bandai Namco Entertainment. The game is directed by Hidetaka Miyazaki, of Demon's Souls and Dark Souls fame, who has described Elden Ring as a Spiritual Successor to the Dark Souls trilogy. Famous fantasy writer, George R. R. Martin, of A Song of Ice and Fire fame, has also contributed to the game's mythos and Worldbuilding. It was released February 25th (It was originally announced for January of the same year, but was delayed by a month), 2022 on the PlayStation 5, PlayStation 4, Xbox One, Xbox Series X|S, and PC; and had a Closed Network Test taking place in November 2021.

In a realm known as the Lands Between, Queen Marika the Eternal rules a massive Empire with the power of a mystical rune known as the Elden Ring, source of the Erdtree. Alongside her, her demigod descendants reign as Generals and Lords with an iron-fist. Or at least, they did, before Marika's favorite son Godwyn the Golden and many of his demigod kin were assassinated by a stolen fragment of the Rune of Death, the Elden Ring itself was shattered, scattering its component Great Runes across the Lands Between, and Marika disappeared without a trace, leaving her throne vacant.

To make matters worse, Marika's remaining demigod offspring and their minions eventually turned on each other, triggering a massive free-for-all Succession Crisis for Marika's crown, where former brethren cut one another down and those who took the scattered Great Runes for themselves have slowly been corrupted mentally and spiritually by the Runes' uncontrolled powers. Now, all that remains of the once majestic Empire is a broken land beset by a bloody Forever War that even the Greater Will has abandoned.

You are a Tarnished, one of the dead who yet live from a line of disgraced exiles banished from the Lands Between long ago, only to now be drawn back by the call of long-lost grace and the lure of the empty throne. With the guidance of grace behind you, it falls to you to confront the inhabitants of the Lands Between, acquire the Great Runes, re-forge the Elden Ring... and with its power, become the new Elden Lord.

In terms of gameplay, Elden Ring is a vast evolution of the Soulsborne formula, adding features such as mounted combat and transversal, Item Crafting, a dedicated summoning system, a vast open-world to explore and fight through (which now includes massive, dynamic "field bosses" to clash with in the open expanses), and a more overt, but still grounded and cryptic Dark Fantasy storyline penned with input by George R. R. Martin. It also features many returning gameplay features from past FromSoftware games, though mostly with unique spins; some examples include a modified version of Weapon Arts (now called "Ashes of War") returning from Dark Souls III and the expansive vertical level design, platforming, and stealth mechanics of Sekiro: Shadows Die Twice, adapted to a more free-form open world. And as always, the brutal difficulty, dynamic bosses, and frequent deaths which defines the Souls-like RPG continue to be in play here.

The game would also receive a comedy manga adaptation called Elden Ring: The Road to the Erdtree.

In 2022, Steamforged Games held a Kickstarter campaign to fund

Elden Ring The Board Game.

"Brandish the Elden Ring... for all of us."
Feedback

Realizing the potential of defeat, Godrick the Grafted decides to cut off his arm... and graft a dragon head in place.

Realizing the potential of defeat, Godrick the Grafted decides to cut off his arm... and graft a dragon head in place.