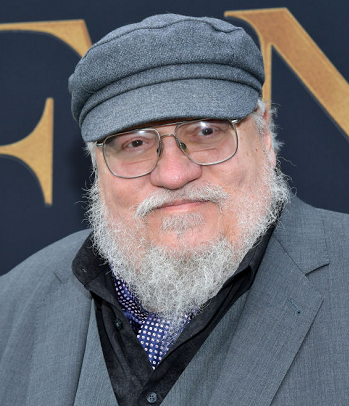 "Don't ask him when it's going to be finished! Don't you know that every time someone asks when [the next A Song of Ice and Fire novel] will be finished, George R. R. Martin kills a Stark!?!"
— Jude8098, commenting on Martin's official blog
Advertisement:

George Raymond Richard Martin (born George Raymond Martin, September 20, 1948) aka "Evil Santa", "Fiction's Most Notorious Serial Killer", or "The Great Bearded Glacier" is an American author and screenwriter. He is most famous for his Fantasy series A Song of Ice and Fire. He lives in Santa Fe, New Mexico, and owns and runs the Jean Cocteau Cinema.

As a boy, he was (and, let us not forget, remains) definitely One of Us. You can see the fan-mail he wrote to Stan Lee when he was sixteen here

His short story With Morning Comes Mistfall was nominated for a Nebula Award in 1973. He also wrote numerous Science Fiction short stories known collectively as "The Thousand Worlds." He has also written political fiction and Horror.

In the 1980s, he wrote screenplays for television series, including The Twilight Zone (1985) and Beauty and the Beast (1987). He often ran into trouble due to failure to consider the reality of how his scripts could actually be filmed within budget, which eventually led him back to books. He is also an editor on the Wild Cards cycle. His short story Nightfliers was adapted into a feature film.

In 1996, he published A Game of Thrones, the first installment in the Door Stopper Fantasy series A Song of Ice and Fire. The series has been acclaimed by critics, readers, and fellow authors alike. He is currently working on The Winds of Winter, the sixth book in the series. The rights to a live-action TV series were acquired by HBO, and the smash hit Game of Thrones was born, with a total of eight seasons airing from 2011 to 2019. Martin himself is credited as the co-executive producer for the series and has been quoted as saying going on set was like walking into a dream and has said in an interview that "my God, they got it right". A prequel series, House of the Dragon, has been made since, based on Fire & Blood and following Martin's own wishes about where to go next in the television format.

Martin is well-known for his cordial relationships with his fans. Some say it detracts from his working pace. He keeps a regular Blog, titled Not A Blog

note And that's the only place he regularly posts personally, according to this

, while his official Facebook and Twitter accounts are ran by his "minions", where he keeps readers up to date on his projects, life, and favorite football teams; he also frequently comments on politics, both the internal politics of the speculative fiction world (see: his extensive commentary on the "Sad Puppies") and general American politics (he is a proud liberal Democrat). He also is a frequent guest at conventions, where he will happily hand out Shrugs Of God and occasionally invite some fans to private dinners. However, he is firmly opposed to Fan Fiction of his works, as he feels it weakens his copyrights and is bad practice for aspiring writers. Fan Art, however, is acceptable.

There is a great deal of controversy over his writing schedule (or lack thereof), particularly the long gap between A Feast for Crows and A Dance with Dragons, leading to a Broken Base of those that felt he should finish the damn books already and those that felt the quality is well worth the wait. Neil Gaiman himself has chimed in on the issue

, summing it up as "George R.R. Martin is not your bitch." Whether or not the completion of Winter will heal the breach in the base probably depends on the quality of the book and how long the next one takes. Some other fans worry about it possibly becoming an Orphaned Series, as Martin has said in the past that in the event he dies before finishing the story, he has left instructions that all his notes and any unpublished manuscripts be destroyed.

He is also credited with helping craft the setting and lore of the 2022 video game Elden Ring.

A word of warning: don't tell him to write faster and for God's sake don't sing a song about it

Also not to be confused with Beatles producer Sir George Martin (his death in 2016 provoked many a brief panic from fans skimming the news headlines, you can be sure).

Works by Martin with their own pages include:

Other works by Martin contain examples of: