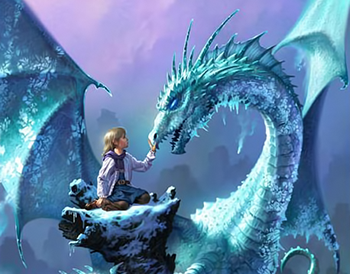 The Ice Dragon is a short children's book written in 1980 by George R. R. Martin, and was subsequently republished in 2007, then in 2014, with original artwork. The book is notable for featuring many thematic and specific elements that would later be reused in the A Song of Ice and Fire series, causing some readers to speculate whether this book takes place in the same universe. Though publishers claim it takes place in the same universe

as A Song of Ice and Fire, Word of God from Martin has denied this

, saying that A Song of Ice and Fire didn't even exist at this time. Admittedly, it's difficult to make this story fit within the detailed history of the book series.

Yet, readers of A Song of Ice and Fire will pick up many parallels and precursors to things in the series. At the core of this story is a conflict between ice and fire. Other similar elements include the importance of winter, dragons and dragon riders, kingdoms and their wars, several familiar location names, snow castles, Adara's resemblence to the Others, and of course, the ice dragon itself, which is a legendary mythological creature and a constellation in the world of A Song of Ice and Fire.

The story is written from the perspective of Adara, a young girl who was born during the coldest winter in living memory. It is said that the cold entered her mother's womb during childbirth, killing Adara's mother, but transforming Adara into a strange, wintery child. Her skin is cold to the touch, and has a cold personality as well, rarely smiling and never crying, nor feeling pain. She has a strong affinity for the cold, and she enjoys staying outside in the winter to build snow castles and play with tiny ice lizards, which only she can touch without harming.

During the winter when she is four years old, Adara first encounters the ice dragon, a creature which brings the cold with it and only appears in winter. In the next year, she first rides the ice dragon, and she rides it every year after. In the backdrop of this, there a war is raging against an enemy kingdom, involving riders of fire dragons on both sides. When the war threatens Adara's family, she must call upon her ice dragon to protect them.