Literature / The Ice-Cream Cone Coot and Other Rare Birds 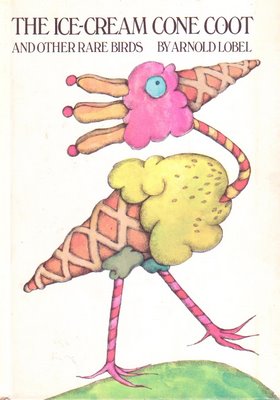 Look for one of these next time you go birdwatching.
Vanilla and Chocolate, lemon and lime.
The Ice-Cream Cone Coot is a treat anytime.
Advertisement:

The Ice-Cream Cone Coot and Other Rare Birds is a 1971 children's book by Arnold Lobel (who is most well known for the Frog and Toad series). It documents a number of strange fictitious birds that resemble mundane objects. These include the Dollarbill Dodo, a bird made out of a dollar; the Safecrossing Crow, a stop light, and of course, the eponymous Ice-Cream Cone Coot. It's beautifully illustrated and whimsical, but sadly out of print.