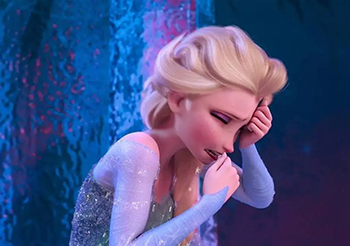 It's not easy being freezy.
"I was disappearing...From ice to fog...Returning to the sky...I just wanted a body that wouldn't melt..."
— Mizzter Blizzard, Paper Mario: Sticker Star
Advertisement:

For the best effect, play this music

in a new tab before reading on.

We tend to link ice and snow with some of our strongest emotions. Snow can represent the tenderness of romance, or the sadness of death. And when we say Grim Up North, we mean grim for a reason. The quiet coldness of snow, ice, and winter tend to induce sadness in us.

Therefore, fictional characters associated with ice and snow, especially if they're An Ice Person, tend to be some of the most emotional, tragic, and/or sympathetic. They may act cold towards others, and have to be taught kindness. They may be lonely and ice-olated (to steal a pun from Elsa.) Or they may even be unhappy about their icy nature itself - cold weather is often seen as harsh and unpleasant, and as a result, it's not very popular among many people compared to, say, warm summer days. They may have Icy Blue Eyes to denote this.

Note that just being a sympathetic character associated with ice is not enough to qualify for this trope. There has to be a specific link between ice and tragedy, either through the narrative or metaphorically.

Compare Snow Means Death and Snow Means Love. Also compare Evil Is Deathly Cold for another interpretation of ice-themed characters, although it may overlap with this trope.