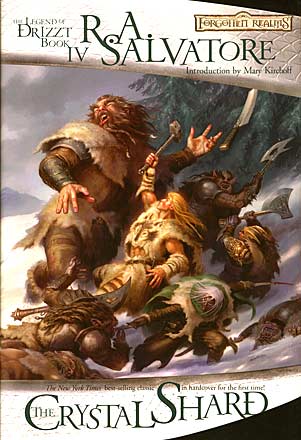 At center is Wulfgar, son of Beornegar, the guy who was supposed to be the protagonist. Below him is Drizzt Do'Urden, the guy who turned out to be.
"I would gladly teach him. I would revel in his successes as much as my own, but I would demand, I would always demand, a sense of humility, dedication, and an understanding of this power I was teaching, an appreciation of the potential for destruction. I would teach no one who did not continue to display an appropriate level of compassion and community. To learn how to use a sword, one must first master when to use a sword."
— Drizzt Do'Urden, Streams of Silver
Advertisement:

The Icewind Dale Trilogy is the first The Legend of Drizzt trilogy of books by R.A. Salvatore written in the Forgotten Realms setting. Although originally intended to focus primarily on the barbarian Wulfgar, by the end of the third book it has shifted to a character who was originally meant to be Wulfgar's mentor/sidekick: the Chaotic Good dark elf ranger Drizzt Do'Urden. Drizzt became so popular that he would get his own prequel series of books and would become the star of pretty much every novel in the series set afterwards. This trilogy also introduces Drizzt and Wulfgar's friends: the dwarf king Bruenor Battlehammer, his adopted human daughter Catti-Brie, and the halfling Regis.

The story begins in Icewind Dale, a frozen wasteland that's populated by settlers who have established fishing towns around the three lakes, barbarian tribes, monsters, and sometimes visiting wizards. Some of these wizards trick an inept apprentice into killing his master (and their rival) for them, and then they leave him behind to freeze to death, which is when he comes across an artifact that gives him the power and desire to conquer the whole place. After he gets defeated, Bruenor decides to go on a quest with the others to find the lost dwarven kingdom of Mithral Hall, which he is the heir to but was abandoned when he was still a child. On this adventure, they have to deal with all sorts of obstacles including, but not limited to: finding out where the hell the place is, orcs, barbarians, racist humans, trolls, bog blokes, evil wizards, dark dwarves, invincible golems, a dragon, and a certain master assassin by the name of Artemis Entreri. Entreri has been hired to hunt down Regis, who had stolen something from his employer years ago. Entreri is impressed with Drizzt's combat skill, which seems to equal his own. Thus, he becomes determined to fight Drizzt to the death in order to find out who is better. He doesn't just grab Regis, but another friend of Drizzt's, and tells Drizzt to come and get him if he cares about them. The chase is on until it ends in the desert city of Calimport, where the story concludes.

Chronologically preceded by The Dark Elf Trilogy and followed by the Legacy of the Drow Series. See also Icewind Dale, a series of Western RPGs set in the same region about eighty years earlier.