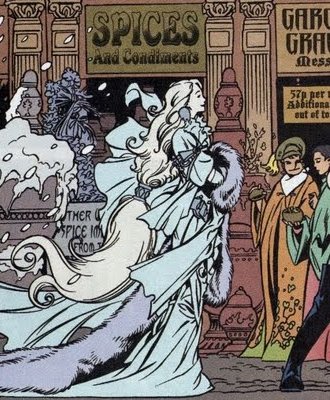 "Fantasy isn't just a jolly escape: It's an escape, but into something far more extreme than reality, or normality. It's where things are more beautiful and more wondrous and more terrifying. You move into a world of conflicting extremes."
— Terry Gilliam
Advertisement:

Fantasy: it's stuff with magic in it, not counting Psychic Powers, or Magic from Technology, or anything meant to frighten, or Magical Realism, or anything strongly religious, or the technology behind the magic that is Magitek, or — where did that clean-cut definition go?

While the core of the fantasy genre is clear enough, there is no succinct definition that encompasses it all. The boundary with Science Fiction is notoriously ambiguous and the boundary with horror is often no less fuzzy. Religiously inspired works, like the Left Behind series, can have a basic good versus evil plotline that would fit well in High Fantasy, but few would place it there. And so on.

Common features of the fantasy genre include:

However, even magic itself isn't a required element, as novels such as Ellen Kushner's Swordspoint, K.J. Parker's Devices & Desires or Ricardo Pinto's The Stone Dance of the Chameleon which feature no magic whatsoever but take place in an alternate, pseudo-historical world, are still classified as fantasy. This is due in part to their widespread use of other tropes associated with fantasy, particularly Low Fantasy. (Swordspoint is an interesting case, because while it contains no supernatural elements in itself, one of its sequels, The Fall of the Kings, is largely concerned with The Magic Comes Back.)

Often placed outside the Fantasy genre, or not marketed as such:

In response to a flood of inquiries to Ballantine Books from grateful readers of the U.S. edition of J. R. R. Tolkien's monumental The Lord of the Rings, many of whom thought Tolkien had invented this, Lin Carter wrote Imaginary Worlds: The Art of Fantasy, a flawed but still valuable

book explaining the origins of fantasy genres (plural) millennia before Tolkien and citing hundreds of authors and titles to guide newcomers. (Carter defined fantasy as literature set in a time and/or place where magic works.) He was also the editor, beginning in 1968, of the Ballantine Adult Fantasy Series

which reprinted many out-of-print and older titles, along with new works and anthologies. Ask your grandparents, check online or in used book stores, about this amazing series published under "The Sign of the Unicorn's Head

." Jamie Williamson's The Evolution of Modern Fantasy, From Antiquarianism to the Ballantine Adult Fantasy Series may also be helpful.