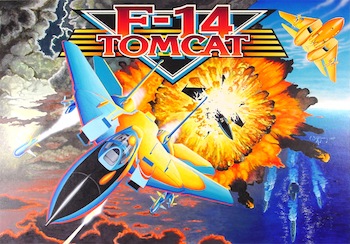 It's fast. It's furious. AND IT FIGHTS BACK!
"Now you die, comrade!"
— General Yagov
Advertisement:

F-14 Tomcat is a 1987 pinball game designed by Steve Ritchie, programmed by Eugene Jarvis, and released by Williams Electronics.

As a pilot of the Navy's F-14 Tomcat, nicknamed "Hitman", your goal is to engage and destroy the evil Russian General Yagov and his fleet. Shoot down all seven of his planes, then defeat the maniacal Yagov himself. But stay on your guard — you'll need your best reflexes to fight off the Yagov Kicker, which suddenly launches pinballs straight down your flippers. Lock three balls to start a four-ball multiball blitz, then make three safe landings on the Launch Ramp to collect the jackpot. For even higher scores, get a Hot Streak going to build the bonus multiplier, then spell TOMCAT to collect the Hot Streak Bonus.

F-14 Tomcat is noted for being the first pinball game to include a ball save feature, referred to in this game as "Flight Insurance".

A digital version of F-14 Tomcat was available on The Pinball Arcade before the license to all Williams/Bally tables expired on July 1, 2018.