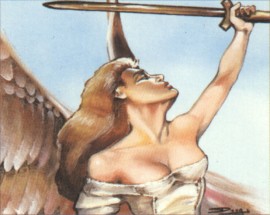 Serra Angel, accept no substitutes.
"14:5 And I saw another angel fly in the midst of heaven, having the everlasting gospel to preach unto them that dwell on the earth, and to every nation, and kindred, and tongue, and people,
14:6 Saying with a loud voice, Fear God, and give glory to Him; for the hour of His judgment is come: and worship Him that made heaven, and earth, and the sea, and the fountains of waters."
— Book of Revelation
Advertisement:

Tropes about the biblical divine messengers, and beings based off them.