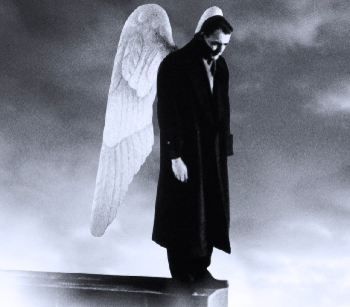 There are those that say beneath his coat there are wings.
— Tom Waits, "Black Wings"
Advertisement:

If angels appear on Earth and are not wearing white robes, they're probably wearing overcoats. Usually winter-weight, wool, 3/4 length overcoats. Sometimes trenchcoats. The trope frequently appears in movies where angels walk among humans, serving as a kind of Uniform Trope to communicate the wearer's angelic nature. The coats may have started as an attempt to hide the angels' wings, but the trend has stuck even in settings where angels don't have wings.

This trope is one of The Newest Ones in the Book; it probably originated with Wings of Desire (1987), although the Ur-Example is Clarence from It's a Wonderful Life (1946). Due to overcoat-wearing badass angels in such sources as The Prophecy and Dogma, there is often some overlap with Badass Longcoat.

Subtrope of Our Angels are Different. For angels wearing white robes, you'll probably find them in Fluffy Cloud Heaven. Distantly related to the Trenchcoat Brigade.