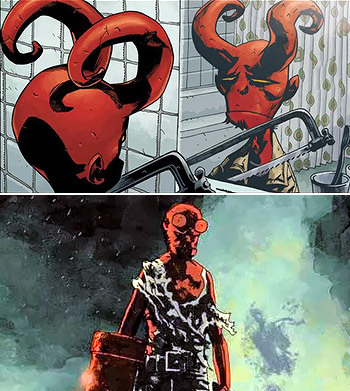 Alice is trying to fit in, but she has some kind of physical feature that makes it clear that she is not a human, or not a normal human. Thus she hides or removes this feature.

This particular masquerading comes in two flavors. It might simply be about The Masquerade, or it may be about her self-image. In the first case, the Maintenance can be nothing worse than a practical nuisance. In the second case, it's usually a part of a deeper pattern of self-hatred. Of course, these two flavors are often mixed with each other, and one might lead to the other.

May be prone to a Glamour Failure later on; Freakiness Shame may come into play when that happens.

This does not include social norms for what is proper or maintenance done for purely practical reasons: Only when it's done to pass for normal or human.

A supertrope of Inhuman Eye Concealers.

Compare to Hiding Your Heritage and Hiding the Handicap.

Alternative Title(s): Masquerade Maintenance, File Them Off Every Morning