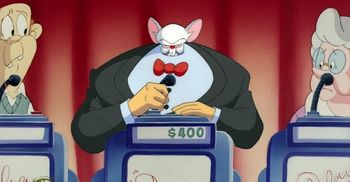 "I'll take 'Who is an impostor?' for $500, Alex."
From gods to aliens to robots and beyond, there are always stories of non-humans disguising themselves as humans, maybe even ghosts pretending to be living versions of themselves.
Advertisement:

The Holobob allows Crypto to take on the guise of humans.

The Holobob allows Crypto to take on the guise of humans.